Call
(256)765-4226
Email:
archives@una.edu
**************
UNA Archives & Special Collections
is located on the
2nd Floor
Collier Library
For additional information on UNA Archives and its collections use this link: 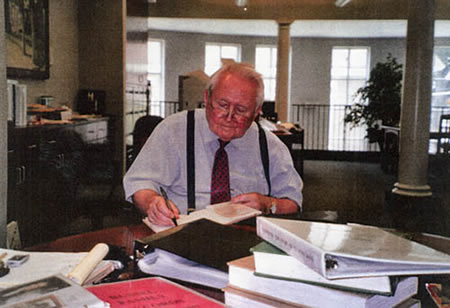 William Lindsey (Bill) McDonald (June 7, 1927 - June 20, 2009) was a native of Florence, Alabama. A lover of history since he was a young boy, Bill McDonald was known for his in-depth knowledge of the area's history. A tireless researcher, he served as the Florence City Historian beginning in 1989 and authored or co-authored fifteen books and innumerable articles in magazines, newspapers and periodicals.

After serving in World War II, Dr. McDonald received a degree in business administration from Florence State Teachers College (now UNA) in 1952. He was a member of the first graduation class of the new ROTC program and after graduation from college he left to serve as a Second Lieutenant in the Korean War. A retired Army Reserve Colonel with thirty-eight years of service, Dr. McDonald's reserve duty included assignments on the staffs of the Provost Marshal General and the Assistant Chief of Staff for Personnel at the Pentagon. In addition to his Florence State degree, Dr. McDonald graduated from the Army's Command and General Staff College (1974), the Industrial College of the Armed Forces (1975); and pursued seminary studies in the United Methodist Church. He was a member of the National Honor Society of Phi Kappa Phi.

After returning to the Shoals, Dr. McDonald was employed with the Tennessee Valley National Fertilizer Development Center and retired in 1988 as Chief of the Budget Staff. A retired minister, he served several rural churches in Lauderdale and Colbert Counties, and wrote prolifically on the history of Methodism in North Alabama. From 1968 to 1989 he served as Chair of the Florence Historical Board and in 1989 was appointed City Historian, a position he held until his death in 2009. He also served as president of the Tennessee Valley Historical Society and the North Alabama Historical Association, as well as Conference Historian for the North Alabama United Methodist Church. Dr. McDonald assisted in the organization of five museums in the North Alabama area and researched and wrote the texts for more than seventy-five historical markers in Florence, Lauderdale County and Courtland. The recipient of numerous awards and commendations, Dr. McDonald was recognized by the UNA Alumni Association with a Community Service Award in October 2000 and conferred with an honorary Doctor of Humane Letters degree by UNA in May 2006.

Bill McDonald collected historical information about the Shoals area for more than half a century. His research involved personal interviews, painstaking analysis of original documents and materials, and an uncanny ability to piece together information and ideas in unique and interesting ways. His personal collection included notes, hundreds of photographs, research documents, and a number of limited and one-of-a kind resources. In addition to his books, the public most often had access to Dr. McDonald's wealth of knowledge through his writings on Shoals history in the Florence Times-Daily.

Bill McDonald was married to Dorothy Carter McDonald, an artist and retired teacher in the Florence City School System. They made their home in Florence and had two daughters: Dr. Nancy Carter McDonald and Suzannah Lee McDonald.