1911 - First librarian is hired as part of staff

1939 - A separate two-story building (now the Computer Center) is added to the campus.

1993 - Computer lab opens in the library

2020 – Upgrades are done to the elevators, heating and air system, and the University Success Center is relocated to the library

2021 -  The UNA Career Center moves to the library 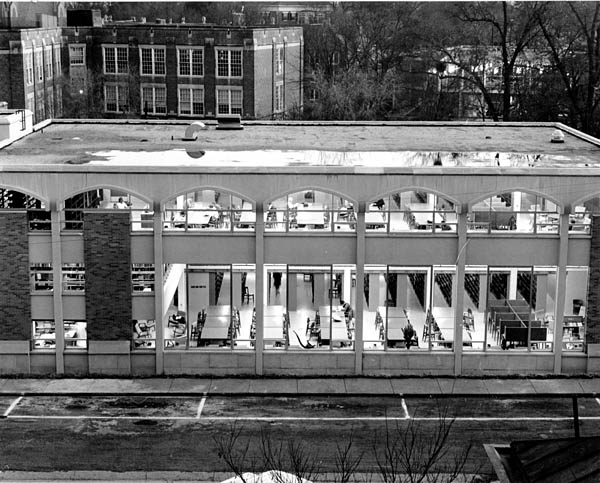 Photo taken before the 1983 addition

The Collier Library of the University of North Alabama has roots going back to its predecessor, Florence Wesleyan University, where library materials were provided by the campus literary societies.  When the university became a state-supported institution in 1872, the State Normal School at Florence catalogue noted that the library consisted of “such of the volumes of the Lafayette and Dialectical Societies as had been gathered together after the war.”  Several of those volumes still exist in Archives & Special Collections.  The first mention of a library other than these organizational collections occurs in the 1895-96 catalogue.  Housed in a single room on the second floor of the original campus building for years, around 1909 the library relocated to a larger room in the newly erected building annex.  When Bibb Graves Hall was completed in 1930, the library was relocated to that building’s second floor.  In 1932, the library became an official federal government publications depository; and, by 1934 it was the largest of the four State Teachers’ College libraries in the state.

A separate two-story building housing the library opened in March 1940.  In 1949, the library was named Collier Library in honor and memory of Dr. C. B. Collier, who had served as Dean of Florence State Teachers College from 1918 until his death in 1946.  In 1961 construction began on a new addition to the library and renovations were made to the original building. Opened in April 1963, the four-level addition doubled the size of the library.  To meet the demands of a growing student body and an expanded collection, another four-story addition was built in 1982.  Once again, the size of the library almost doubled.  The original 1940 structure was renovated to accommodate the need for a campus computer center, which continues to be housed in that building.  In 2006-2007, Collier Library underwent a series of repairs on the 1961 wing that improved the integrity of the exterior support columns, corrected water leakage problems, and replaced windows.

In the 1980s, automation began and UNA joined the Library Management Network (LMN).  In 1989, public online catalogues brought full automation to the library.  That same year UNA joined the Network of Alabama Academic Libraries (NAAL).  In Summer 1993, as part of a two-year campus-wide automation update program designed to link every building on campus to a fiber optic network, a general-purpose computer lab was opened in the library.  Today the library provides computers and access to hundreds of electronic databases.  Wireless access was provided in 2005  and a laptop check-out program soon followed.

After 2010 the University would see many new additions and improvements to the Library. In 2014 a new modern glass entrance is constructed.  In 2015 a much needed new roof is installed. In 2016 the new "Think Space" is added later renamed "The Cell". In 2017 three new versatile classrooms were added to be used for teaching, study areas, and gathering places for students. That same year the first floor of the library is remodeled.  In 2019 new more efficient inside lighting is added and the first Caffe' Dallucci coffee shop opened in Collier Library. In 2020 upgrades were made to the library's elevators, heating and air system, and the University Success Center is relocated to Collier. And in 2021 the UNA Career Center moved to the Library.  All of these changes and improvements further enhanced the student's ability to learn, study, and relax during their time on campus.