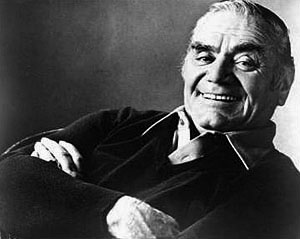 He was born Ermes Effron Borgnino on January 24, 1917 in Hamden, Connecticut. His parents were Charles and Anna Borgnine, who immigrated from Carpi, a small town in Northern Italy at the turn of the century. As a child, Borgnine enjoyed watching sports, especially boxing, but acting did not interest him.

In 1935, following his graduation from high school, Borgnine was uncertain about his future and he entered the Navy. He stayed in the Navy for ten years and returned home in 1945 still undecided about a career. After toiling at a few jobs at local factories, his mother suggested that he try acting since he had such a forceful personality. He took her advice seriously and promptly enrolled at the Randall School of Drama in Hartford.

Borgnine finished his courses at the Randall School of Drama and joined Robert Porterfield's famous Barter Theater in Abington, Virginia. He worked four years at the theater playing every type of role imaginable and doing odd jobs around the theater. His big break came in 1949 when he made his acting debut on Broadway playing a male nurse in the play "Harvey".

Borgnine moved to Hollywood in 1951 to pursue a career in screen acting. He made his film debut in China Corsair in which he played a Chinese shopkeeper. His film career gained momentum in 1953 when he won the role of Sergeant "Fatso" Judson in From Here To Eternity. That memorable role led to numerous supporting roles as heavies in a steady string of dramas and westerns.

Borgnine was able to avoid type casting in 1955 by winning the role of Marty Piletti, a sensitive butcher, in Marty. He won the Academy Award as well as every other major award for the film, despite strong competition from Spencer Tracy, Frank Sinatra, James Dean and James Cagney. Throughout the 50s and early 60s, Borgnine gave memorable performances in films such as The Catered Affair (1956) with Bette Davis, The Vikings (1958) and Barabbas (1962). Later notable films included The Dirty Dozen (1967), The Wild Bunch (1969), The Poseidon Adventure (1972) and Emperor of the North Pole (1973).

Beginning in 1962 and ending in 1966, Borgnine played the leading role in the popular television series "McHale's Navy". Borgnine would return to television in 1984 in the action series AirWolf and in 1995 in the comedy The Single Guy. He also appeared in several television movies.

Ernest Borgnine has always said that his greatest love is acting and he continued to work up until his death in 2012. His amazing prolific career included appearances in over 100 feature films, three television series, as well as lending his voice to such animated films as All Dogs Go To Heaven 2 (1996) and the popular television series SpongeBob SquarePants. In 2009, he received an Emmy nomination (his third) for his guest appearance on the series ER. His last film was The Man Who Shook the Hand of Vicente Fernandez (2012).

Borgnine's autobiography Ernie was published by Citadel Press in July 2008.

Borgnine was married to cosmetic company owner Tova (Traesnaes) Borgnine from 1973 until his death. Borgnine was previously married to Rhoda Kemins (1949-58), actress Katy Jurado (1958-1963), Ethel Merman (1964) and Donna Rancourt (1965-1972). He has one daughter with Kemins and two children with Rancourt.