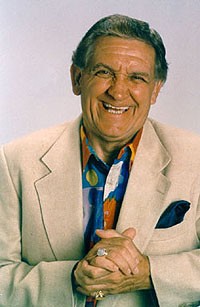 George Lindsey was born in Fairfield, Alabama on December 17, 1928 and grew up the small town of Jasper, Alabama. He spent most of his childhood at his grandparents home and frequented the local movie theater where he was enthralled by movie cowboys such as Hopalong Cassidy and Bob Steele. George displayed a penchant for entertaining at an early age and would do anything for laughs. He was voted "funniest boy" throughout his high school years. At the age of 14, he saw a production of Oklahoma! in Birmingham and knew then that he wanted to be an actor.

George also became interested in football and the sport gave him an opportunity to advance his education. After brief stays at Walker Junior College in Jasper, Alabama and Kemper Military School in Boonville, Missouri, he later won a football scholarship to Florence State Teachers College (now the University of North Alabama). George was popular in college and in addition to quarterbacking the Lions football team, he also was active in theater (where he finally got the chance to perform in Oklahoma!), and various other clubs and organizations. His major was biological science and physical education and he graduated in 1952.

Following his graduation from UNA, George joined the Air Force and was based in Orlando, Florida. There he worked as a recreations director and spent his spare time producing entertainment shows, doing stand-up comedy and acting in a local theater group.

George returned to Jasper and George was hired as a coach/history teacher at Hazel Green High School near Huntsville, Alabama. After a year of teaching, George decided to move to New York where George could study with Helen Hayes at the American Theater Wing. There he studied voice and diction, classics, and body movement and ballet. He completed the program and got the lead role in the class graduation play. Following graduation, George hit the streets and began looking for work. He did bit parts in local productions and some work as a stand-up comedy in clubs and dinner theaters. His big break came a few months later when he was picked by director Joshua Logan for a major role in the play All American. The play ran for three months and after the close, George received another off-Broadway role in the play Wonderful Town.

George dreamed of working in Hollywood and in 1962 when Wonderful Town ended its run in San Francisco, he headed for Los Angeles. He signed with the William Morris Agency and began to get roles on television shows such as The Rifleman, Twilight Zone and The Alfred Hitchcock Hour. He also got a part in the feature film Ensign Pulver.

George's most famous role, however, was that of Goober in the popular TV series The Andy Griffith Show. George had initially read for the role of Gomer Pyle, but fellow Alabamian Jim Nabors was eventually chosen for that part. When Nabors was given his own show, the producers approached George about playing Goober, Gomer's cousin. Thus began a fruitful five years on one of the most popular running series ever on television. Following the cancellation of The Andy Griffith Show, most of the major actors reprised their roles in Mayberry R.F.D., a spin-off of The Andy Griffith Show.

George expanded his talents following Mayberry R.F.D. by recording a comedy album in Nashville called "Goober Sings". It was in Nashville that he was approached to continue the character of Goober in the popular television variety show Hee Haw. It would prove to be a successful venture for George and he would work with Hee Haw for the next 20 years. In addition to Hee Haw, he also appeared in numerous guest roles and Disney movies.

George Lindsey has always been interested in helping others and his humanitarian achievements over the years have been notable. He has raised more than 1 million dollars for the Special Olympics. For 17 years, he conducted the George Lindsay Celebrity Golf Tournament in Montgomery, Alabama which raised money for children with mental disabilities. He also helped raise funds for an aquatic center for the Alabama State Hospital.

In 1992, UNA presented Lindsey with a honorary doctor of humane letters degree.

In 1998, he helped establish the George Lindsey/ University of North Alabama Television and Film Festival. It is an annual event that provides young filmmakers the opportunity to show their work and learn more about the filmmaking industry. Through his contacts in the entertainment industry, he has been able to bring in as featured artists such luminaries as Ernest Borgnine and Tom Cherones.

George Lindsey died on May 6, 2012 in Nashville, Tennessee following a brief illness. He was 83. He was buried at Oak Hill Cemetery in his hometown.